It will be held on 5th March and based at Westley Waterless Village Hall near Newmarket.

Forward 2020 report and results are at the bottom of this page. 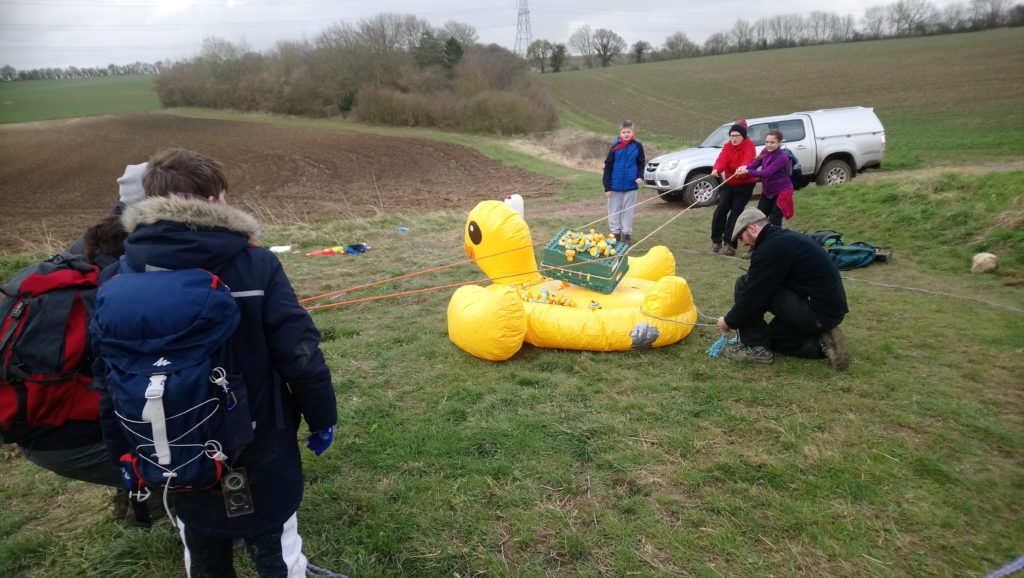 Forward is CUSAGC’s annual incident hike for Scouts and Guides (10-14s). It takes the form of a ~10 mile hike, with five checkpoints spaced around the route where challenges allow teams to earn points. Two trophies are available to be won; one for Scout Association teams and one for GirlGuiding UK teams.

Teams are of 4-6 members, with the option of having an additional chaperone to help with navigation (a decision made and arranged by the team’s Guide/Scout Leader). Teams must decide their route based on 6-figure grid references given to them when they arrive at HQ on the day and complete the route within a 7-hour time limit, including stopping at the activity bases to earn points. Start, and therefore finish, times are staggered, the first teams usually leaving HQ at about 8am, and all are back before dark. In addition to challenges, and completing the route, teams are also given a quiz sheet with questions related to the route and puzzles in order to gain valuable extra points.

Checkpoint challenges require good communication and teamwork, and are often very fun for both the participants and the CUSAGC volunteers running them! The first aid base makes an appearance every year, alongside a whole host of other challenges. In previous years teams have been asked to take part in nuclear disarmament, pitch tents blindfolded, make spaghetti towers, herd sheep, transfer Smarties using straws, tie themselves in knots, copy Lego models whilst blindfolded and much, much more!

Teams are provided with hot drinks at the middle checkpoint and a hot snack and drinks on return to HQ. Trophies are awarded once all the scores are in.

The event is fully risk-assessed, insured and run conforming to SSAGO rules (which are a combination of The Scout Association and GirlGuiding UK’s) on safety and safeguarding. We have recently had this all approved by the Cambridgeshire Scout Activities Team, and would be happy to provide details to any interested parties. Landowners, parish councils and the police are always informed.

Where is it held?

When is it held?

It usually takes place at the very end of February or beginning of March, towards the end of Cambridge University’s Lent term. Forward 2021 will take place on the 6th of March.

How much does it cost?

In short, yes! There’s no requirement for leaders to stayand help but we are always in need of willing volunteers to assist with running bases, driving, cooking, doing admin and control etc. Let us know if you’d like to help!

On Saturday 29th February 2020, 41 teams of Scouts and Guides descended on Comberton Scout Hut to take part in the annual Forward incident hike. The event, run by Cambridge University Scout and Guide Club (CUSAGC), required teams to walk an 11 mile route round several villages near Comberton. Four challenge bases along the way provided the teams with a chance to work together on a variety of different problems. The aim was to complete all of this within 7 hours, at the end of which the teams were rewarded with hot dogs and doughnuts.

This was the largest Forward in recent history, with almost 200 participants entering. Three teams came all the way from London to take part. Everyone involved performed admirably despite a rainy start and a significant amount of mud along the route.

This year, the bases included a duck-themed (and mud-coated) obstacle course, tangram puzzles, a quiz and a first aid scenario run by the Cambridge District First Aid Team. Teams earned points based on how well they completed the tasks as well as their teamwork skills. An observation quiz and how much of the route they completed also contributed to their final score. The scores were extremely close at the top: Framlingham Guides A successfully defended their title as Guide trophy winners, and 1st Whittlesford and Duxford Scouts and Leagrave Scouts B won the Scout and chaperoned trophies respectively.

CUSAGC is grateful to Comberton Scouts for the use of their hut, and to all the helpers who made the event possible. Forward will take place again next year on the 6th March. In the meantime look out for Marathon (incident hike for members of Scouting and Guiding aged 14+) on the 21st November. Anyone interested in being added to a mailing list with information about both events should email saglo@cusagc.org.uk.